How to write a movie review essay

Start by leaving yourself plenty of time for your project. It is not like a social media post where you watch a movie, bash out a harsh blog, and then post it online. You need as much time as you can get. If you have only left yourself a few days, then get in touch with our professional writing service PaperWritingPro. They have academic writers on hand who have the skills, qualifications, and experience required to write a paper in a short space of time.

Watch the movie once and keep a Dictaphone close by (you can use the voice recorder on your Smartphone). Speak out any ideas and anything you notice as you watch. This is the starting point on how to write a movie review essay. Do not write them down because it takes too long, and it takes you out of the flow of the movie.

Write your Dictaphone notes down once the movie is over and start expanding on them. Each will have their own relevance in terms of then and now, and you will need to write about both elements. 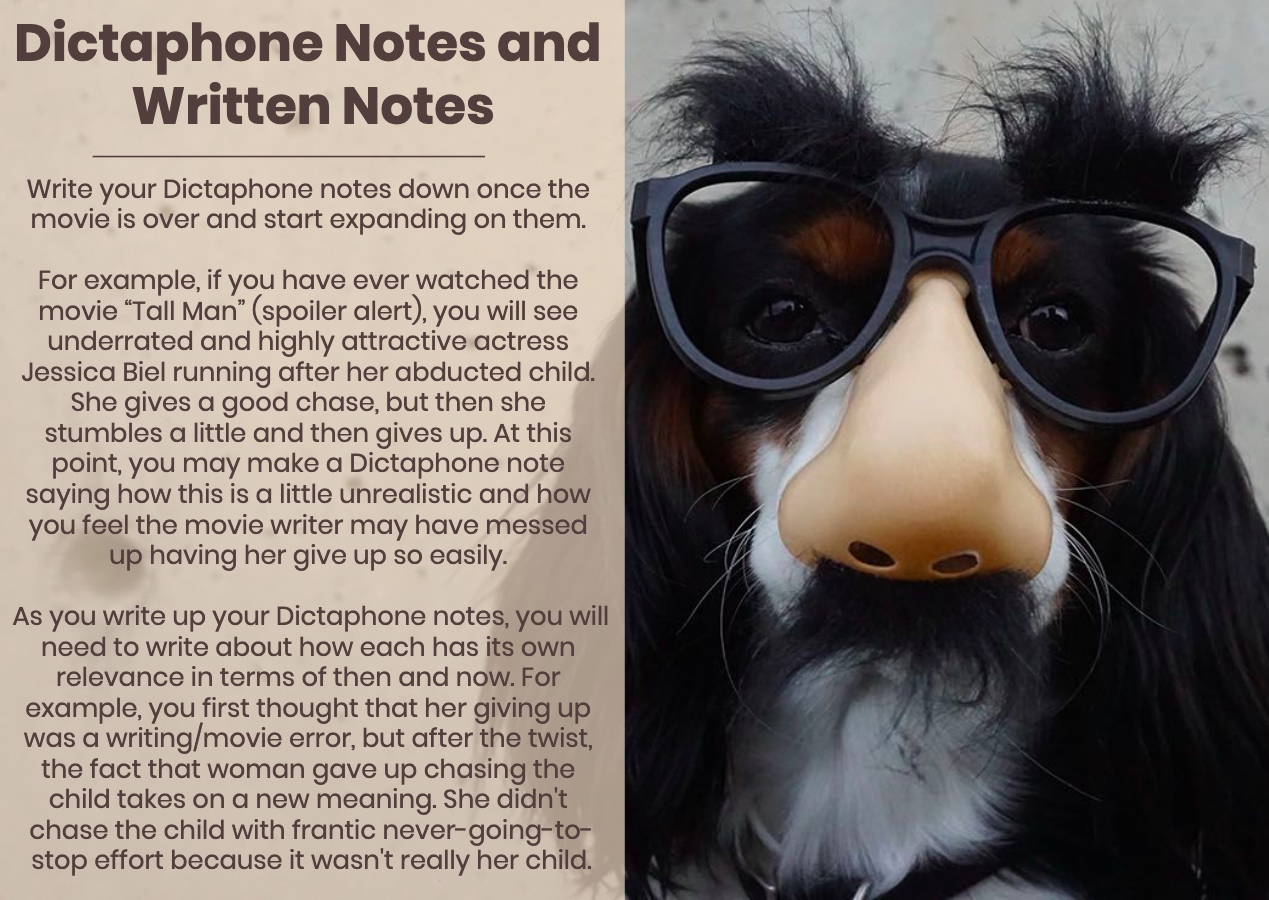 For example, if you have ever watched the movie “Tall Man” (spoiler alert), you will see underrated and highly attractive actress Jessica Biel running after her abducted child. She gives a good chase, but then she stumbles a little and then gives up. At this point, you may make a Dictaphone note saying how this is a little unrealistic and how you feel the movie writer may have messed up having her give up so easily. When the movie is over and the twist is revealed, you find out that she was the abductor and the child was never hers. As you write up your Dictaphone notes, you will need to write about how each has its own relevance in terms of then and now. For example, you first thought that her giving up was a writing/movie error, but after the twist, the fact that woman gave up chasing the child takes on a new meaning. She didn’t chase the child with frantic never-going-to-stop effort because it wasn’t really her child.

You have now started writing a movie review that already has more depth than the sorts of things you see online. Your notes should already point out experiences, ideas, points, and principles that occur while watching, and you are able to put them in context after seeing the whole thing. Stage two takes that process a little deeper.

You now watch the movie with full knowledge of how the story plays out. You now take a new set of Dictaphone notes with the movie’s ending in mind. This will give you new insights into where the movie did well, where it did bad, where it made sense, where it broke its own rules, and where it went wrong.

Remember watching the Sixth Sense movie and hearing your friend say how she noticed the clues to the twist a lot more during the second viewing, you are essentially going to do the same thing with the movie you are watching.

Once you have watched the movie again, you may write more notes based on what you just saw and what you said into your Dictaphone. You now have several sets of notes that you can put towards writing a movie review.

You now start writing a movie review that uses all the notes you wrote over the past few sessions. Your job is to point out the things that the movie did well. Comment on how the movie was shot, written, directed, and acted. If you are taking a technical course such as a media course, then you may also like to comment on technical points such as lighting, composition, staging, etc.

Refining ideas mean taking your notes and combining them so that they form the basis of your essay. You trim out any repetition, you expand your comments, and you create usable points that you are able to add into your essay.

Start with something you notice within the movie. Give it a header on your word processor document, and then collect together all your notes on the thing you notice and copy them onto the document. Do not cut them from your original notes because you may use those same notes again.

Take what you have noticed, along with your notes, and start questioning it. The deeper and more intelligently you question it, then the more impressive your movie review is. For example, in the movie Mr. & Mrs. Smith, does Brad Pitts character lie to his wife so emotionlessly because it is part of his job (writing) or because it fits the scene (director) or because he is a bad actor (acting)? Is his emotionless and casual lying part of his character development, is it a factor that is ignored in the movie, does it explain his actions later, is it a movie trope, or was it a stylistic choice?

How to write movie reviews for extra marks

If you are going to make comparisons in your essays, then make them very big and very obvious comparisons. For example, if you were reviewing the movie “Big Fish” and you were making a point about how the cadence in the character’s voice helps to highlight the whimsical movie style, then you could/should compare it with a movie that has a completely different style such as the uptight styling of “The Killing of a Sacred Deer” with its robotic talking scenes.

As a final tip, try to look at what other people have written about the movie. Do not copy their work, but there are times when other people notice things about movies that many others have not. For example, the people who praised the movie “Maleficent” were the few who understood the link/mirroring between a woman losing her breasts from cancer (something the actress had actually undergone in real life) and a woman’s loss of femininity. The people who scored poorly with their movie review essays were the ones who didn’t notice this link/mirroring and instead judged the movie on its basic technical merits alone.